Hi everybody. This is one of the few posts, I’ll write in English. For the simple reason, that the people I will write about have a chance to actually read it.

But let’s start at the beginning.

Last Friday (September 28) we took the bus to Arica, which was actually a pretty impressive ride. All the time, we drove through the Atacama desert, seeing basically nothing but stones, dirt and sand. But every now and then we came to rather sharp and deep drops along the road, leading to green valleys with small villages in them. The only pic I can offer, is one of those I had to shoot out of the bus window. It’s of no good quality, but maybe it suffices to give an impression. 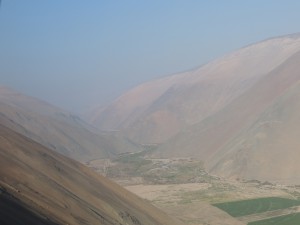 So Friday evening we arrived in Arica, which is described as a surfer’s town with a cool atmosphere. I am still looking for both of it…

Or let’s say – I was. On Saturday Dirk and me went straight to the beach, to get an impression, find a surf shop and rent some boards. We got the impression – long and lonely. But we got neither surf shops nor boards. After walking along the beach for approximately 1 or 2 hours, we figured that the concept – as we are used to from Europe – of Cafes, Bars, Shops, etc. at the seaside seems to be unknown in Chile. Actually, we didn’t see something like that on any beach we have been yet. Usually, right next to it lies a street of between 2 and 6 lanes and then houses or offices.

So – being pretty frustrated, we already saw our plan of surfing vanishing, as the one to buy motorbikes did before. The only idea I had, was to go into one of the surfwear-shops in the main commercial zone in the inner city. Since they just sell clothes to look like a surfer, but no real surfing equipment (which we knew before) our plan was to ask, where we actually might find that real stuff.

After overcoming some major, Spanish-language-related obstacles, the guy in the shop finally realized, what we were looking for and marked the place to go on our map. So we went there – just made a short extra turn, to take a look at the other beach of the city. So we came to being up on a hill, standing at a crossroads and consulting our map, when a Chilean guy stopped by in his car.

Nacho (for all Germans: yes – that is his name) was driving somewhere (I don’t know where) with his mother on the passenger seat, saw us looking puzzled and asked in clear English, if we needed some help. Don’t know why, but my first impulse was not to bother him with our problems.

BUT – I screwed that impulse, went over to his car and showed him the place on the map, we were trying to find. Which was actually one of the best impulse-screwing I have done on this journey.

Since he looked a bit, as if he might be surfing himself, I added that a surf equipment shop is supposed to be around there. Yes – he did surf himself and he knew the place. Oh my god – it seemed, that we might finally get our boards somewhere. But it got even better. After a short consultation with Jimena (his mother) they said “hop in”, we’ll bring you there.

And then we got to know the helpfulness of Chile: we drove to the store, which (how could it be any different?) was closed. First thing Nacho did, was to get out of the car and knock on the adjacent door. The man living there just laughed and said, that the store had no regular opening hours. Sometimes, the owners are there, sometimes they are not. Great!

BUT there was a mobile number written on the door (actually they used a black pen on a black door, which made the reading somehow difficult). Before I even realized, Jimena had her mobile at hear ear, Nacho dictating the number and they were calling there. Only drawback – the number didn’t belong to the owner of the store, but to some completely different person.

OK – seemed like the surfboard idea had to die as well.

BUT Jimena had a friend (or was it a relative) who has a surf school and maybe he rents out equipment. If we’d like to go there? Sure – if it doesn’t cause any trouble. No, not at all. So next thing was, to drive to the surf school. Of course, the person we were seeking wasn’t there. He was at the same Beach, we had been walking along for 2 hours in the hunt of a surf shop…

If we’d like to go there? Sure, if they just would tell us, where to go.

BUT again, I underestimated their readiness to help us. Of course, they drove us there. During the drive I learned that Nacho once had long dreadlocks, which he still keeps in a box, and that some time ago he played in a black metal band. He had some rather funny stories to tell of a gig, where everybody was on the stage, except for the drummer. When looking for him, the band spotted him actually crawling up the stairs, since he was so drunk, he couldn’t walk any more.

At the beach – well, guess who wasn’t there? Yes – the person who would possibly have board to rent…

BUT there was some other guy, Nacho knew. And – believe it or not: he indeed had boards and even neoprene suits to rent out. After having driven Dirk and me around the city, hunting down surfboards for about at least an hour, Nacho invested another 20 minutes or so, to translate and arrange the perfect situation for us: the surfboard-guy brings the boards and suits to the beach in the morning, agrees on a pickup time with us and takes them back in the afternoon. Which is pretty convenient, since our hostel is about a half-an-hour-walk away from the beach. And all that for 50k pesos per person for the full week (which is about 80 euros).

So, finally a bit happier, we got ready to walk back to our hostel.

BUT – of course Nacho and Jimena drove us there. And gave us their contact details “if we are in need of anything”. Jimena even offered, to drive us around, if we’d like. We should just give her a call.

I am really deeply impressed of the magnitude of friendliness and helpfulness they both showed.

Thanks really a lot, Nacho and Jimena!!!

So, since Sunday, each day we walk to the beach, try to surf a bit (trying instead of actually doing it is due to our limited capabilities…) and walk back to the hostel in the afternoon.

Our planning is, to continue that way until Saturday afternoon, then to get our bags packed and to travel to Arequipa in Peru on Sunday. There we booked a rental car (yes – we did it again…) to drive through the Andes to Lake Titicaca and further on to Machu Picchu.

Let’s see, how the rental car idea works out this time…